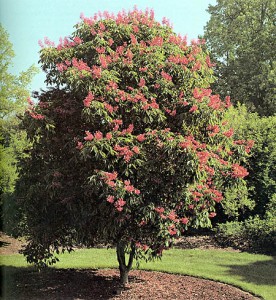 Also known as Firecracker Plant, this shrub or small tree is characterized by beautiful, upright clusters of dark-red flowers and makes a handsome ornamental plant for use in parks and lawns.

Hummingbirds and bees are attracted to its flowers, which bloom in March, April, and May. The light brown fruits reach maturity in September and October and contain saponins, which are poisonous to humans but are not easily ingested and therefore pose no serious threat.

It is native to the southern and eastern regions of the United States, along the coastal plain from southeastern Virginia to western Florida, and through the Gulf states to western Louisiana.