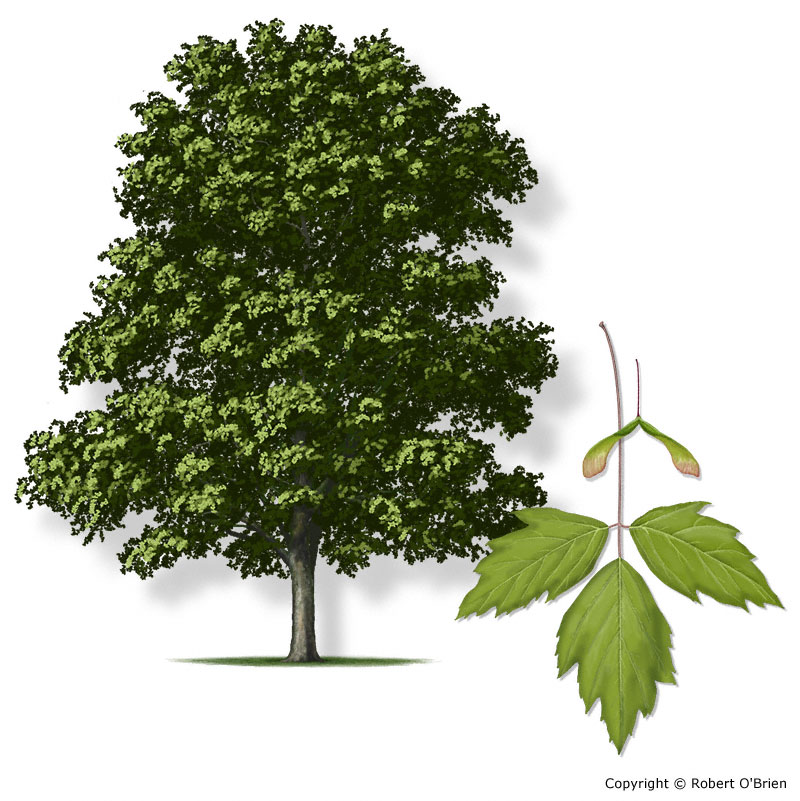 This is a small to medium-sized deciduous tree in the maple family. Averages 60′ tall and more than 20″ in diameter. It has opposite, compound leaves, and is the only maple that regularly has more than three leaflets. Twigs are greenish to purple. Bark is pale gray or light brown, smooth on young trees, and heavily furrowed on old trunks.

Boxelder is one of the few maples that is completely dioecious, meaning that its flowers are unisexual, and separate male and female flowers occur on separate trees. The male and female flowers appear similar, but only female trees develop fruit, a paired samara that matures through the summer. Flower color ranges from violet to reddish to green, unrelated to sex. They occur on long stalks in drooping clusters (racemes) that appear in March before the leaves.

Boxelder is found across the entire breadth of North America, often growing along streams and swamps, in floodplains, and other areas with ample water supply. It grows quickly and vigorously, preferring open sites with abundant sunlight. Due to its rapid growth and adaptability to a wide range of soil types, it is sometimes planted for quick shade and windbreaks. However, it has the disadvantage of being short-lived and is susceptible to wind or storm damage because of its weak wood. Although the light, close-grained, softwood is undesirable for most economic uses, it is a commercial source of wood fiber for use in fiberboard. Aesthetically, it is often considered weedy or scraggly by landscapers due to its susceptibility to insects, tendency to drop twigs and branches, and leaves that curl up and turn brown during dry spells.